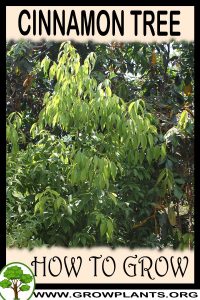 Cinnamon tree grow and care – tree of the genus Cinnamomum also known as Cinnamon plant, Cinnamon tree is perennial evergreen plant grow for the edible bark and leaves also used as ornamental plant for the fragrant and possible to grow as bonsai, can grow in tropics or subtropics or mediterranean climate and growing in hardiness zone 9+.

Leaves edible are can be used, flavor of the leaves or fragrant week, some species are stronger than the others, after a while from pick up the leaves the smell and the flavor almost gone.

Cinnamon tree for sale – Seeds or Plants to Buy

How to grow Cinnamon tree – growing condition and care:

What is the best way to start growing?
Plant / Seed / Vegetative Reproduction propagating by cutting or air layer, propagation by cutting, when start from branch need to choose brown fully grown use hormones that fit for woody branches, need to keep high humidity, moist soil and if put it in close box need to ventilate air at least twice a day, watering by spraying and tale care don’t let it dry.

Is it necessary to graft or use vegetative reproduction?
No, but possible to start from cutting or air layer and when the plant get the right condition it is possible and it’s hard to start by cutting

Difficulties or problems when growing:
Some cultivars contain toxic (courmarin)

How to plant cinnamon tree:
Dig a hole bigger 30-50% than the roots ball, possible to cut little bit the roots depend the condition of the tree, cutting can help the tree to send new roots and establish better, put in the hole organic matter, humus and dead leaves and mix it with the soil, after this put the tree and cover lightly, if the tree need care support use bamboo or other kind of cane and cover the soil with mulch, if the tree is not stable consider to prune, water it twice in the first day and every day for two weeks.

How to prune:
Week, dead branch, design in the plant with one or few main trunk it’s important for harvest because if will be a lot of little branches and not main trunk it will be hard to harvest and it will take more years.

Growing is also possible in a planter, flowerpot or containers:
Yes, start with small pot 20-30% bigger than the roots ball, every time that switch the container to bigger switch some of the soil to new soil until arrive to the desirable container size, after that every few years better to switch part of the soil and cut some roots, no need to take the plant out just from the side of the container, soil can be used potting soil or mixture of peat soil and perlite, water it regularly and care when put bottom for the pot be aware not to let the water stay there more than one day and do not over water it’s destroy the soil and the roots, it’s not like to grow outdoor overwater will destroy the soil, need to add hummus few time a year.

General information about the flower:
Small flower in yellow color

Pollination is done by:
Bees

Thinning the bloom:
There is no need in the blossom unless need seeds and as long as the tree young it’s better to cut the bloom stems

Leaves harvesting season:
All year but in cold winter better not in the winter

How to harvest the leaves?
After tree establish root it doesn’t matter as long as you leave enough leaves on the tree

Information about leaves:
Light to dark green depend on the sun exposure , shiny oval leaves

When to harvest bark?
All year, but better in the spring

How to harvest bark?
After tree establish every year it’s possible to cut vertical line in the bark and wait until it disconnect from the tree, another option it’s to wait until the tree will take off the bark

Information about the bark:
Brown bark and it’s used after dry

How to make Vegetative Reproduction?
Cutting

How much time does it take to grow roots in vegetative reproduction?
3-6 weeks, but can take much longer, as long as the branch still show sign of a live it’s still possible

What is the treatment for vegetative reproduction?
Moist, wet soil, half shade, high humidity, better to keep the plant in fog

How to grow Cinnamon tree from seeds

Sowing requirement:
Seeds are yellow with a brown bark, in the wild the seeds pass through the digestive of an animal, to simulate this situation rub the seeds and remove some of the bark, also recommend to sow in slightly acidic soil.

How to plant cinnamon seeds:
Dig hole bigger than the seeds cover lightly and better to cover it with vermiculite for better result

Germination time:
20-30 day but can be more than 4 months

Do the seeds require burying?
No

Cinnamomum verum (can also be found under the name of true Cinnamon tree, Ceylon cinnamon, Mexican cinnamon, Cinnamomum zeylanicum) is native from Sri Lanka but the tree grows for commercial purposes in Zanzibar, Egypt, Madagascar, Vietnam, Brazil and southern India. The tree grows in hardiness zone 10+. The tree is small 10 to 15meters (32 to 49 feet) tall. Among the Cinnamon cultivars, this variety is the most popular. Its taste is considered as the best, the finest but also the most expensive. Coumarin is a natural substance, widely used in perfumery, and especially in cinnamon. Coumarin is toxic to the liver (hepatotoxic), and can cause toxic hepatitis. Ceylon cinnamon bark barely contains it compared to the other Cinnamon species. Ceylon cinnamon has many medicinal properties: antibacterial with a very powerful with broad spectrum, it is used as a tonic and general stimulant, care for anti-inflammatory activity and to control diabetes with hypoglycemic benefits. Ceylon cinnamon was used by the traditional Chinese medicine and by Ayurveda medicine for over 5000 years. For harvesting, the bark of the branches of Ceylon cinnamon is removed. Then the layers of cork and bark are released and piled. The thin layers dry in 4 to 6 hours in a well-ventilated and warm environment. Only the thin inner bark is used (0.5mm -0.02 inch). When cinnamon is dried, it naturally curls up into “quills.” Ceylon cinnamon bark has a light hazel-brown color and fragrant aroma.

Cinnamomum burmannii – (also known as Indonesian cinnamon, Padang cassia, Batavia cassia, Korintje) grows in hardiness zone 9+. It’s another type of cinnamon but much less expensive than Ceylon cinnamon and Cassia cinnamon. It is used as a spice and medicine, in particular it is known to improve blood sugar control.

Cinnamomum loureiroi (also known as Saigon cinnamon, Vietnamese cinnamon) grows in hardiness zone 10+. The tree measures 15 to 20meters tall (49 to 65 feet). The bark is used medicinally as carminative. Saigon cinnamon has between 2 to 5% essential oil in content and 25% cinnamaldehyde in essential oil. These amounts are the highest of all the cinnamon species.

Cinnamomum Tamala (Malabathrum, Indian bay leaf, Cinnamomum Tejpata, Tamala cinnamon, Tamaala) – The tree is medium sized and can grow up to 20meters (66 feet) tall. The leaves and the bark are used in medicine to care with conditions as diabetes and arthritis. The aromatic leaves are used as a spice. The leaves contain 2%essential oil in content.

Cinnamomum camphora (Camphor laurel, Camphor tree, Camphorwood, Japanese camphor, Formosa camphor, Gum camphor, Shiu leaf, Chinese sassafras and True camphor) is a large and spreading tree, growing 15 to 25 meters (49 to 82 feet) tall. The bark is light brown. The flowers are white with a dirty yellow center. The leaves are green, shiny and when crushed smell camphor. It is used for camphor production (which is used as a spice). The plant can be poisonous in big quantities. It can be also used as an insect repellent. 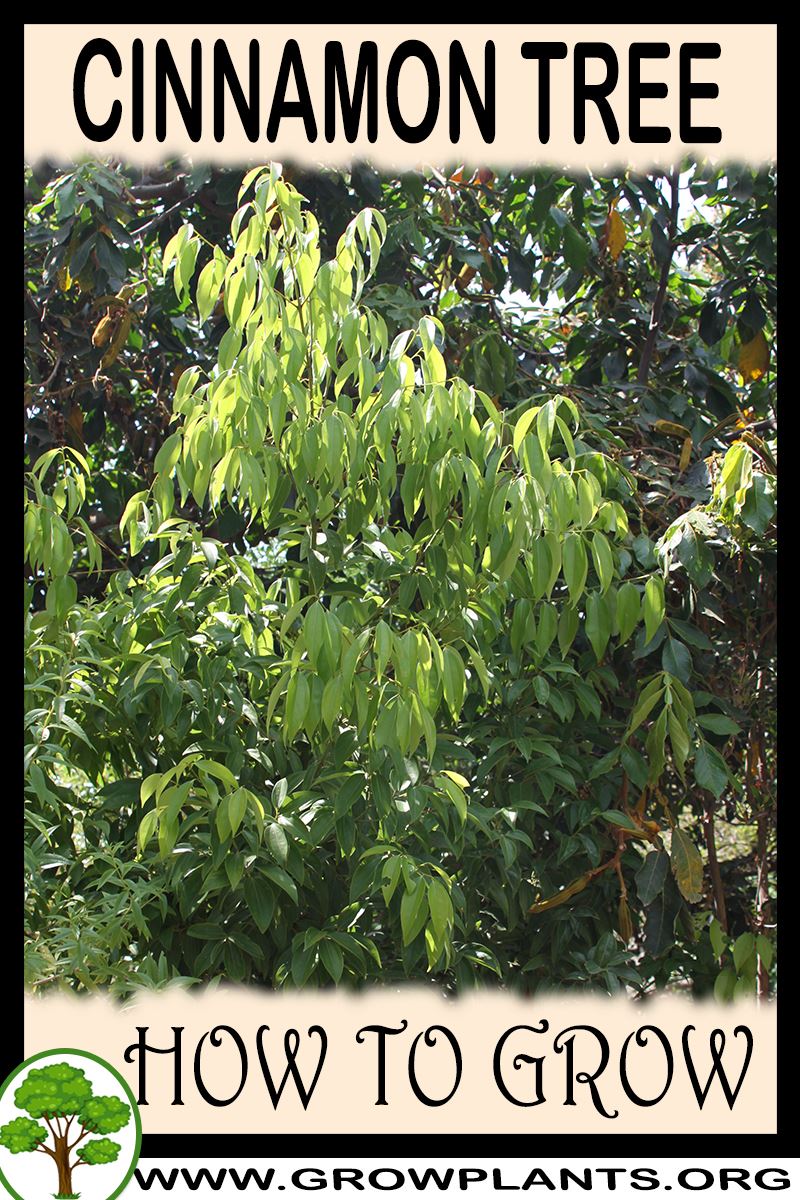 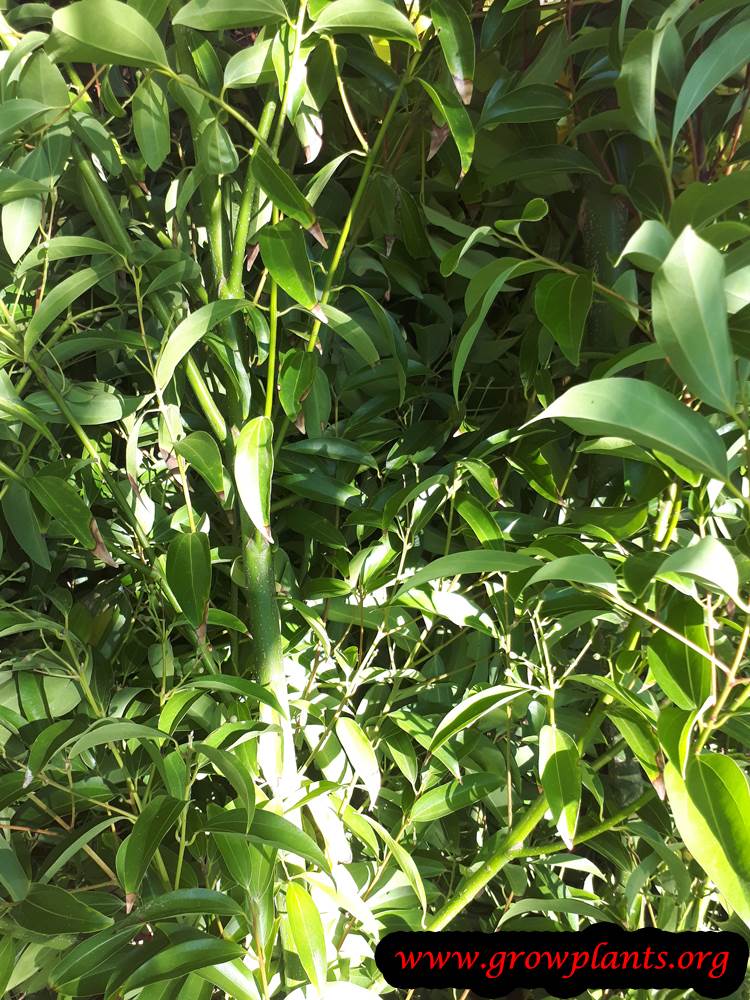 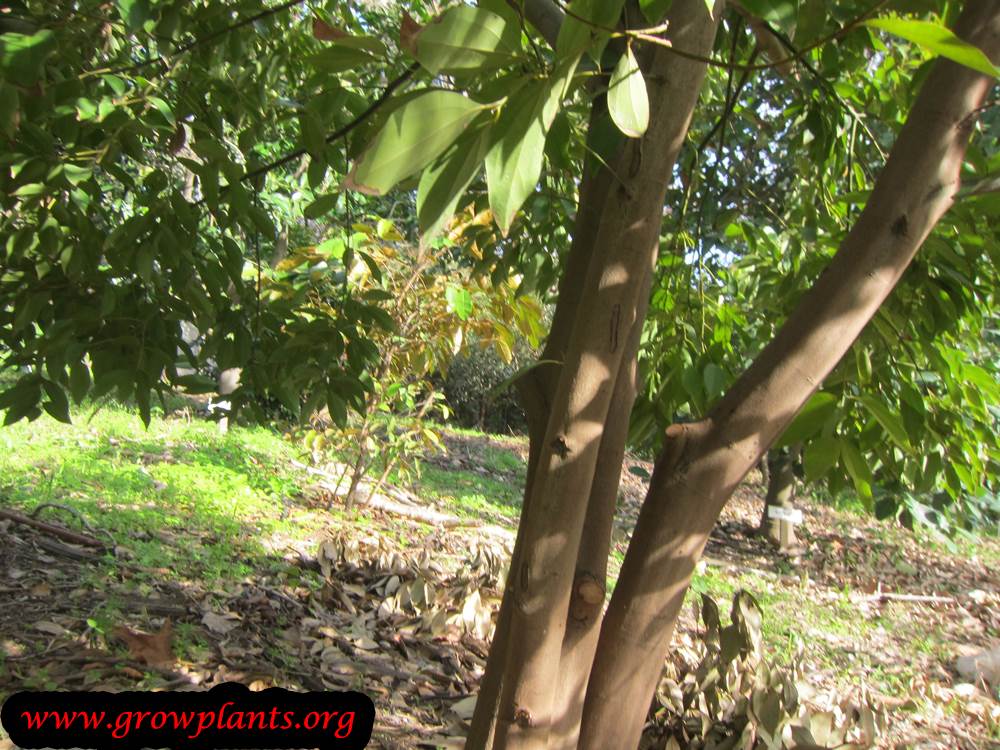 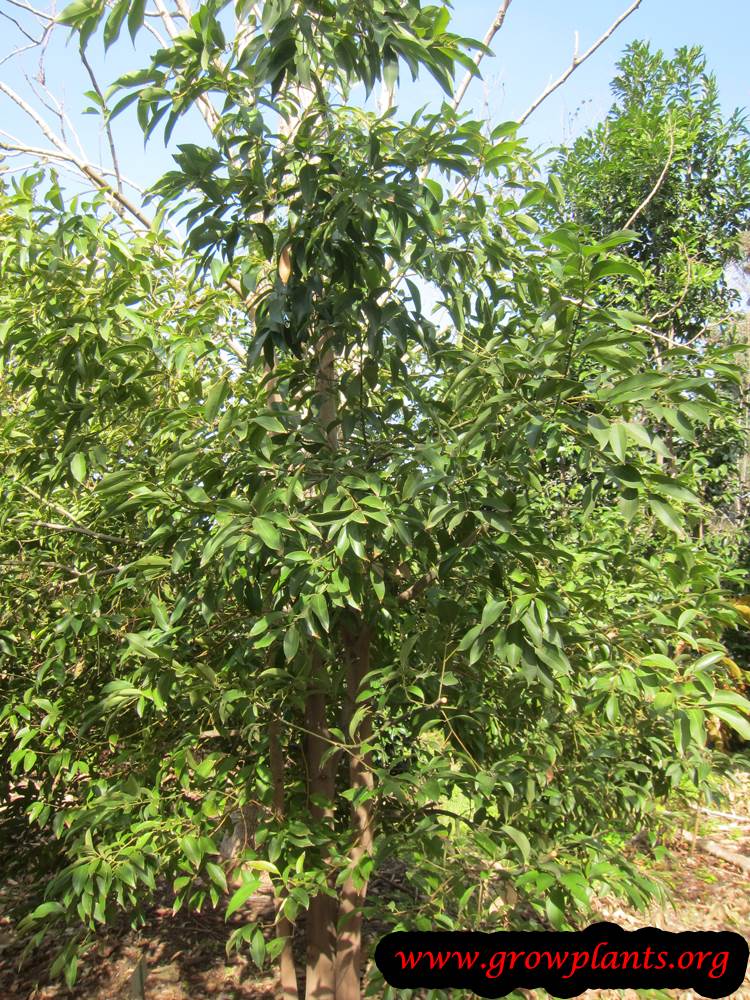 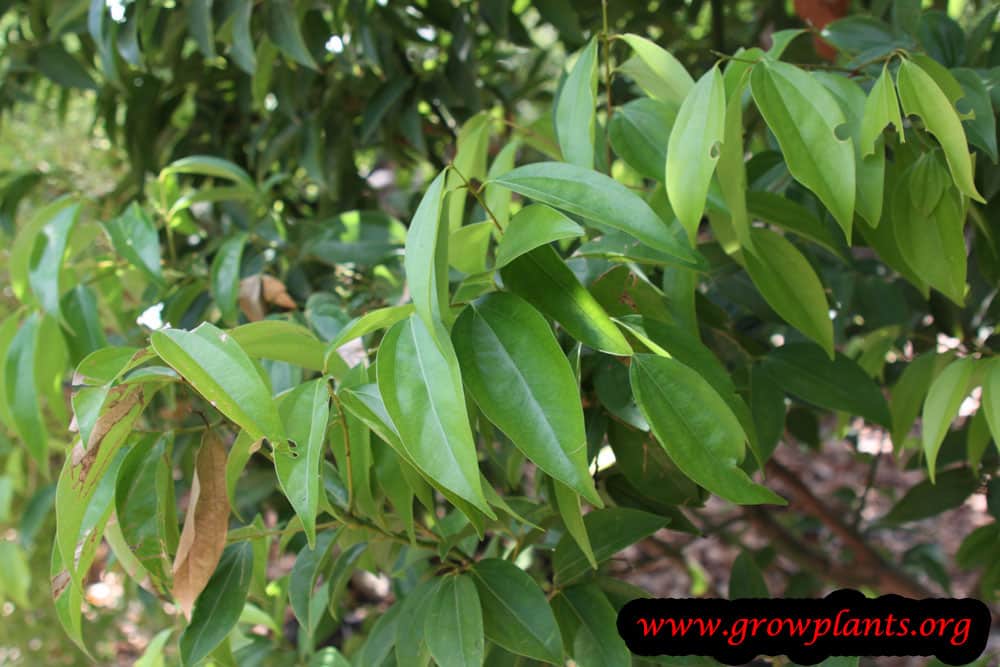 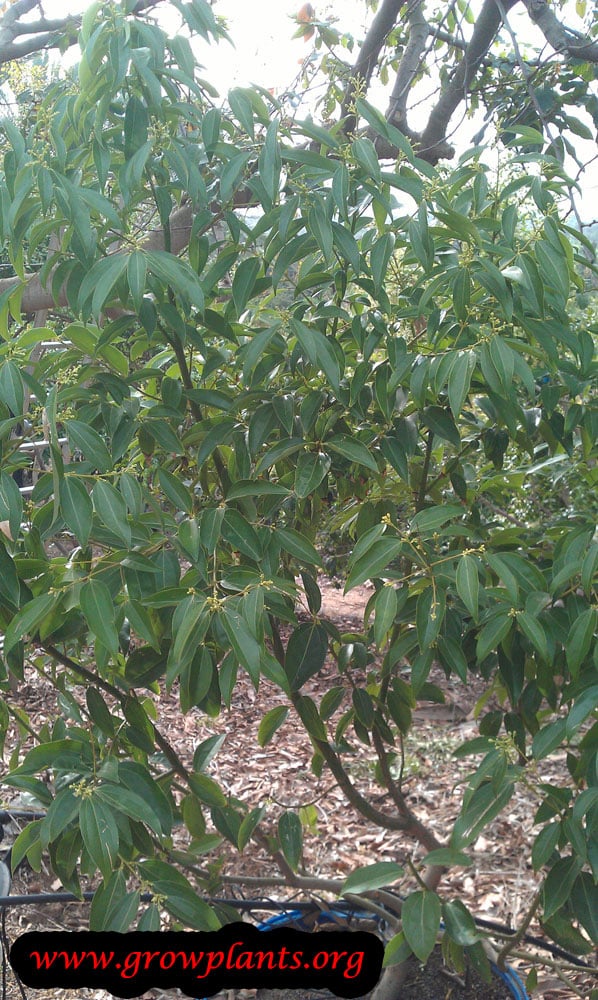 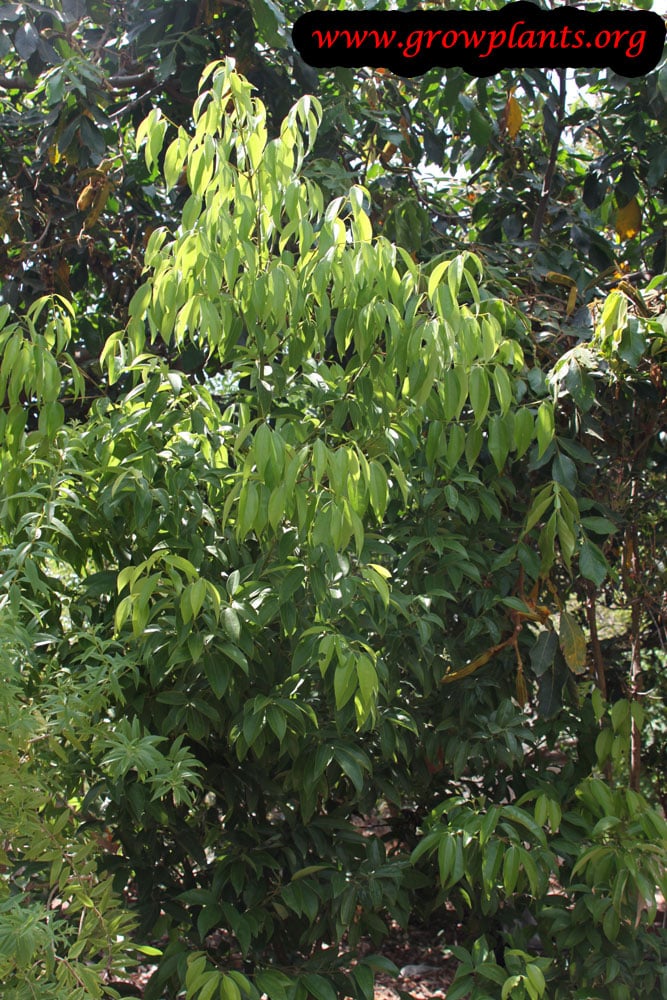